The following seems like one of those polls software companies like to give, no matter what you answer, it favors them. 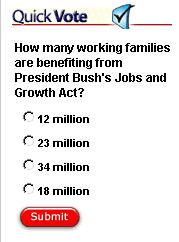 While this is from George Bush's website, I am not so naive as to think many other poiticians wouldn't stoop just as low.
When I was in school, I liked multiple choice tests, because you knew one of the answers given was correct.  What do you do when faced with a multiple choice test (or poll) where none of the choices is correct, or at the least where you are not convinced any one is correct?  Whether you give the "closest to correct" answer or abstain, you are playing into the hands of the person giving the poll.  What is a person to do?

What to do? I dunno, bow to the pressure to abandon all forms of critical thinking? :-) Seems like that is the desire of every politician... "don't want them crazed masses thinkin' too hard, might be trouble."

As a Republican and a Bush supporter, I'm officially dismayed such an obvious ploy made it onto their website... doesn't help anyone. Lower's Bush's apparent intelligence down to the John Kerry level. ;-)

Now, if there wern't gramatical / spelling errors in my posts, they'd be funnier.

Kerry wouldn't be lower than Bush on any level unless Bush were on a mountain. Bush's "apparent intelligence" is an apt description.