Now, this isn't a post about lies that news stories may contain, we'll save that for another time.  This post is about a more peculiar phenomenon which seems to be more common these days - headlines that don't tell the truth about the story underneath.
On CBS News, there is a headline titled Poll: Most Oppose Same-Sex Unions, which seems fairly clear.  There must have been a poll, and in the poll, more than fifty percent of the people polled must have opposed same-sex unions, right?
Wrong!  See this quote from the actual story:

So, if 57% support either marriage or civil union, two forms of "same-sex unions", that must mean that 43% (or "four in 10" as they say it) oppose same-sex unions.  So how can the headline claim that "most oppose same-sex unions"?  See the article.  In case you think this was just an innocent mistake, note that the first paragraph also claims that "The American public continues to oppose the idea of same-sex marriage and supports a constitutional amendment to outlaw it.", as if that proved the headline correct, even though their own statistics challenge this.
This is a particularly nefarious form of lying, because many, many people will only see and believe the headline.  If anybody challenges CBS News, they can say it was clearly just a mistake, since the actual numbers were right there in the story.  This is not the first time I have seen this form of lying, but it worries me.  What do you think?
Oh, by the way, note that many other sites carry "headlines" from CBS News and other such sites, and on those other news feeds, little but the headline will ever be seen.  Just try searching the web for "Poll: Most oppose same-sex unions" and see how many hits there are clearly pointing to the CBS News site.  Thus, the lie spreads and will be quoted and believed even though the story belies the headline. 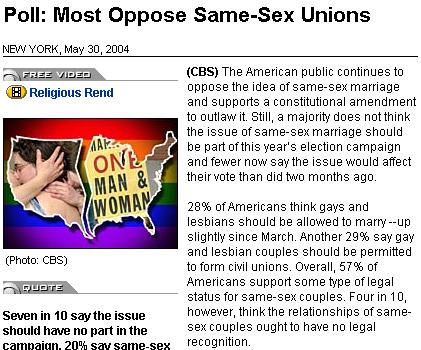 Nice. Very nice. I sent CBS feedback taking them to task, but I expect it will hit the circular file immediately.

By the way, Ben, your blog's front page shows 'no stories found' because we're in June now. RSS readers will see this, but website readers will not, fyi...

One of the Legendary headlines in the illustrious history of our local paper was:

when JPII was installed.