My daughter has told me many tales of woe about her friends and their difficulties getting a job.  The competition is fierce, and college kids or older people are holding on to jobs that would once have gone to high schoolers.  But this post is not about the economy or high school angst.  This post is about a very odd and eccentric, but surprisingly talented, pair of you people who have found a unique way to make a success of themselves.  They bill themselves as "Harry and the Potters", and they sing at a variety of venues, including the Shaker Heights Public Library. 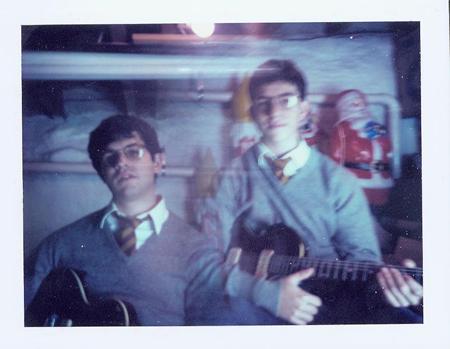 Picture two young men, both of whom are in character as Harry Potter, although one is supposed to be 4th year and the other 7th year.  They sing a wide variety of songs about life at Hogwarts, some of them very good songs, and some simply strange.  They came complete with at least one groupie, and with CDs, and stay in character the whole time.  My wife and son insisted on buying one of their two CDs, and we have listened to it several times since.  The music sounds like early Jonathan Richman and the Modern Lovers, and I consider that a compliment.  Weird, eclectic, but catchy.
If you are wondering whether these two could ever possibly be in your area, fear not.  They seem to go just about everywhere.  See their schedule, but I have excerpted part of the month of July below just to give you a feel for it.  Try to imagine a show like this actually going all over the country in their Pottermobile.  It wouldn't work without a healthy dose of initiative, and it would last without a healthy dose of talent.
Of course, it would probably be easier to go to one of their shows if you had kids along, but if you don't have any of your own, borrow a couple from a neighbor.  This is not to be missed.  And don't imagine that this is all sweet and bubblegum.  They really rock the place!
July 10th, Boulder Public Library, Boulder, CO
July 13th, San Pedro Library, San Pedro, CA + house party in Huntington Beach
July 14th, Sylmar Library, Sylmar, CA
July 15th, Los Angeles Public Library (Chinatown branch) + house party in Isla Vista (near Santa Barbara), CA
July 16th, San Francisco Public Library + 826 Valencia, San Francisco, CA, 2 shows!
July 17th, El Sobrante Library (outside San Francisco), El Sobrante, CA
July 19th, the Love Nest, Olympia, WA
July 20th, University Bookstore, Seattle, WA
July 21st, House show @ 4126 N. Commercial, Portland, OR
July 22nd, Veloshop, Portland, OR
July 23rd, Steilacoom Community Center, Steilacoom, WA
July 26th, 2 library shows! Littleton, CO and Broomsfield, CO
July 27th, the Dusty Bookshelf, Lawrence, KS
July 28th, Genesis House Coffeeshop, St. Louis, MO
July 30th, 2 shows! Shaker Heights Library and Mac's Backs in Cleveland, OH
July 31st, Altoona Public Library, Altoona, PA

Hmmm... looks like they're in Cambridge tomorrow, but I can't make it. Plus, it's still three weeks til the kids come home from camp. Then it looks like they swing southward for the rest of the summer. Oh well. :-(