Selling a 9 year old on CoexEdit

Sometimes a picture is really worth a thousand words.  My nine year old son was curious about what the heck I was working on so hard, and I said I'd show him.  I have to admit that the results surprised me considerably.  I apologize for the long post, but you have to see the series of images to really get the impact.  For what it is worth, my son "got it" completely about CoexEdit, which is a good sign, I think.
I took about 10 minutes and created a simple database for my son, based on some of the coding I have been doing.  I wanted one database that would show various ways of editing rich text in Notes and on the web.  Since my son has only a tiny bit of technical expertise, but does have a blog where he likes to post funny pictures of our cat and way too many fonts and colors, I decided to model the content I'd show him on the sort of thing he would create.  I create three separate posts in the Notes client to show him what his blog might start out as:
Test 1 - Colorful text (the way my son likes to use it)

Test 3 - Links (he likes his blogs to point to each other, but I used Copy Selected as Table to make a point)

Now, note that each of these specifies "Native HTML".  This is what you use for editing on the web if you leave the rich text field marked as below: 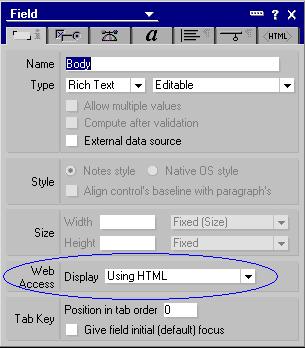 This is where it got fun.  Here are the three posts as they appeared when edited on the web:
Test 1 - Colorful text (edited on web using regular HTML)

My son was appalled.  "Where are the colors?  What happened to the big text?  Where is the cow?"  Exactly, yet this is what Notes gives as the default.  Still, to be fair, I showed him what the three posts looked like edited with the Java applet.  Of course, first I had to switch from Firefox because the Java applet couldn't be found by Firefox?  Can you really not use the Java applet under Firefox?
Anyway, here are the same three posts shown edited by the Java applet.  This time, I also saved them to show what you would see back in Notes.  You can easily guess what you would see if you had saved with the regular HTML above.
Test 1 - Colorful text (edited on web using Java applet)

"Hey, Dad, those didn't look so bad.  Except for that last one, you had colors and the sizes worked and the cow was there.  Why don't people just use that?"  It sounded good, but then I showed him what happened when I submitted each of those three without making any changes at all.
Test 1 - Colorful text (seen in Notes after saving with Java applet)

"Why are the last two the same size, Dad?  And why is there so much room in between each line?  It looks weird."
Why indeed?
Test 2 - Graphics (seen in Notes after saving with Java applet)

"Dad, no cow!"
Test 3 - Links (seen in Notes after saving with Java applet)

"Cool, the table is back!  But what are the weird 'X's?"
As my son noticed, the results are not so great after editing with the Java applet, aside from the limitation on browsers and the other issues using a Java applet.  The graphics get lost, the doclinks get wrecked, and even if you retain a link, it isn't a doclink anymore, but a URL link instead so it opens a browser.  Not ready for prime time, really, but that is still what most people in the Notes/Domino world have to live with.
"But, Dad, I still don't get what you have been doing?"
Granted, he was probably just eager to get back to Adventure Quest, but I figured I should cut to the good stuff.  Here are the same three posts edited by FCKEditor, a pretty good web based editor, and driven by our new CoexEdit product.  Without CoexEdit, this would generate great HTML, but would not allow any editing in Notes.
Anyway, here are the same posts being edited in FCKEditor:
Test 1 - Colorful text (edited on web using FCKEditor with CoexEdit)

"Looks good, Dad.  The table works at least, but it doesn't look a lot better than the applet thing."
Kids!  Never satisfied.  But I got him.  I showed what the results were in Notes after saving.
Test 1 - Colorful text (seen in Notes after saving with FCKEditor and CoexEdit)

"Hey, the sizes are all right, and they aren't all over the page!"
Test 2 - Graphics (seen in Notes after saving with FCKEditor and CoexEdit)

"Yes!  We have our cow back!"
Test 3 - Links (seen in Notes after saving with FCKEditor and CoexEdit)

"It looks just like before.  The links work and everything.  Cool, Dad!  Now, can you get my blog set up so I can use this.  Then I can change stuff when I am visiting Ian's house."
So, I was able to convince my nine year old.  Did it help you at all?

Great stuff, Ben! When are you going to put it in here so I can write my comments in rich text?