Bobby Henderson has chosen this opportunity to reveal to the world (or at least the Kansas State Board of Education), the widely held belief in the Flying Spaghetti Monster, and a demand that it too be included in the curriculum of the schools in the great state of Kansas.  He describes the compelling scientific evidence for this belief scientific theory, and makes this eloquent plea:

Let us remember that there are multiple theories of Intelligent Design. I and many others around the world are of the strong belief that the universe was created by a Flying Spaghetti Monster. It was He who created all that we see and all that we feel. We feel strongly that the overwhelming scientific evidence pointing towards evolutionary processes is nothing but a coincidence, put in place by Him.

Don't miss his compelling graph of the correlation between pirates and global warming (pirate garb being de rigueur amongst devotees of the FSM).  I want to stand tall with Bobby Henderson and all fellow believers in the Flying Spaghetti Monster and the power of His Noodly Appendage.  FSM deserves equal time with Intelligent Design in the Kansas public schools.  Speak truth to power! 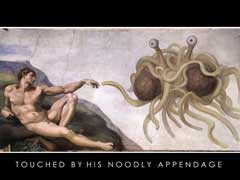