In his Lotus Notes on Web 2.0 blog, William Beh has an interesting post on Lotus Notes Categorized View using Rico Accordion.  Of course, the technique was for web browers, but it led me to think of an interesting technique where you could use a similar approach with a Notes client.  Of course, this technique only makes sense for a view with a relatively small number of categories known in advance, but that is not all that uncommon a situation.  The technique uses a caption table.  For those who didn't notice, IBM added caption tables in Notes 6 as an alternative to tabbed tables.  Caption tables work in much the same way that the Rico Accordion style works, with a click on the caption collapsing the other categories and opening that section (it is really a row, but it looks like a section).  You can create a caption table using the standard Create - Table menu action: 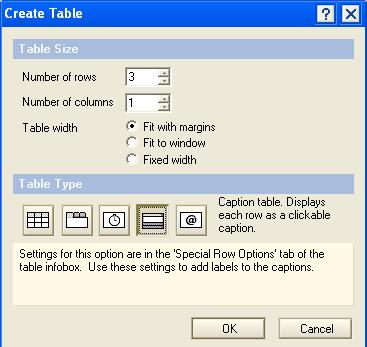 Now, the trick to this technique is to create an embedded view in each row of the table, and set the Caption and the Show single category values to the same value.  Make sure the Width value of the embedded view is set to Fit to window.  What you get looks like this (from a post about this technique in the IBM Partner Forum:

Sory about the black border.  I am not much good at Camtasia yet.

That's great Ben! I was working on something similar (being inspired by William's post)...you beat me to it! :-) I haven't used them a lot, but caption tables can be useful in certain UI situations. Thanks for the post...

Nice. Will definitely going to give it a try.