I left yesterday (Friday) from Cleveland at 10am, and had a very long layover in Atlanta, which was made more pleasant eventually by the arrival of Rocky Oliver and his 15 year old daughter, Kris.  We were all travelling together, and we managed to get three exit seats next to each other, which made the long trip to Düsseldorf much more pleasant.  We arrived at about 7am, where we were met by Bernfried Geiger, our host from Bundled KnowHow, and a good friend besides.  Bernfried and his wonderful wife, Birgit, had agreed to take us to Trier, a city said to be the oldest in Germany.  I don't think any of us realized how long the trip would take, but Birgit cheerfully drove us all through miles and miles of countryside and the occasional traffic jam, while Rocky, Kris and I kept fading away in the back seat due to lack of sleep. 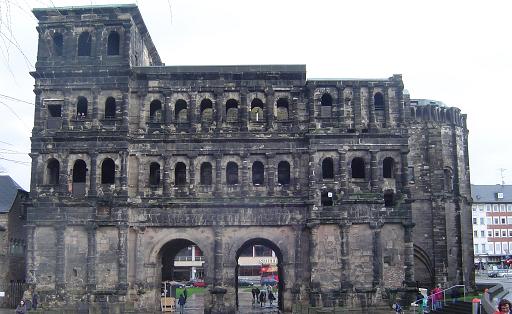 When we finally arrived, it was clear it had been worth the effort.  This is the old Roman gate, originally built in about 300AD, which still stands at the entrance to Trier.  The town itself is one of those wonderful mixes between old and new that you find in Germany and elsewhere in Europe.  There are modern shops nestled under buildings that have been around hundreds of years.  The justaposition is sometimes jarring, sometimes entertaining. 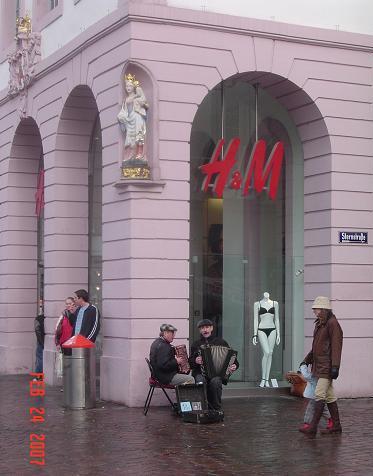 One of the two highlights, for me, was seeing the cathedral.  It was started in 384AD, but not finished for centuries.  It is hard to capture the whole building, but here is a door that really appealed to me. 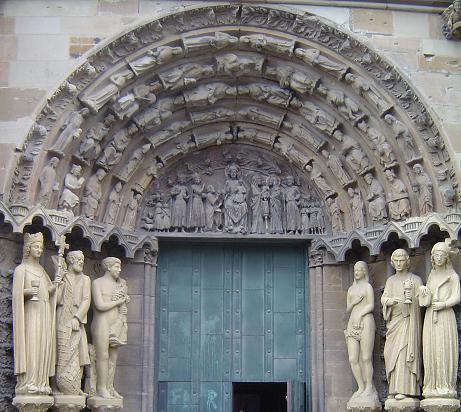 The other highlight took me completely by surprise.  As we were leaving Trier, Bernfried drove us over to the old Roman arena.  It was unbelievable. 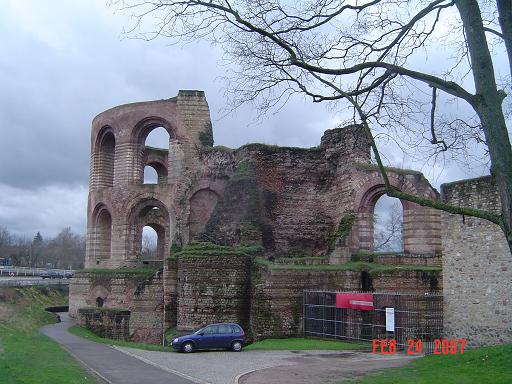 More later, when I am less tired.

This entry sent me searching for my pictures from my trip to Germany in the late '70s. I have a picture of the Porta Nigra from the same vantage point that you took yours, as well as a picture of the old Roman Arena sans automobile.

glad you enjoyed your stay among Roman ruins.

But: the building in the last pic is not the arena - it is the Imperial Bath (Trier was capital of the Western Roman Empire). The arena, which simultaneously functioned as the Eastern of the four city gates, is just a few meters away.