All your base are belong to IBM: MIME rendering

Translation can be funny, as when a Japanese game producer included the immortal words "All your base are belong to us!" as a translation of something that made much more sense in Japanese (I hope).  Translation, or any data conversion, is far less funny when it makes you look bad.  With Notes/Domino 8.5 due out in the not too distant future, I want to show a few different examples of how Notes/Domino 8.5 (beta) still translates poorly when sent outside to your customers and friends.
Part 1: Formatted e-mails sent to the Internet
It will come as no surprise that e-mail sent from Notes does not look the same as e-mail sent from other e-mail systems.  IBM is bashed about this all the time, and has been for a decade.  The really surprising thing is that so little improvement has been made in the past several major versions of Notes/Domino.  Let me show you an example that came directly from a customer to me several years ago.  The text has been made generic, of course, but the table has otherwise been left alone.
1) E-mail as it appears in Notes 8.5 (beta) 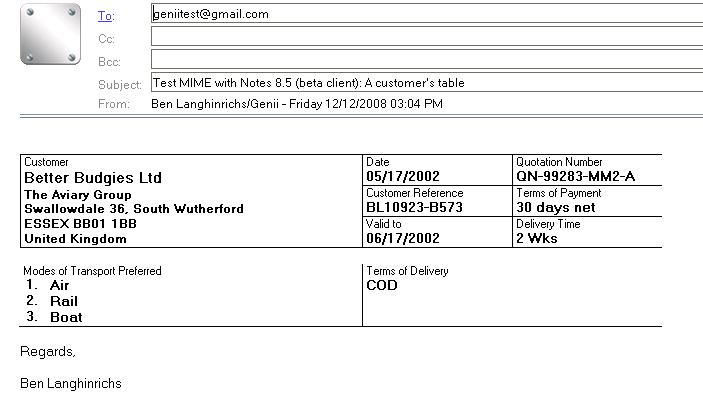 2) E-mail in GMail after being converted to MIME by Notes 8.5 (beta)

2a) E-mail in GMail after being converted to MIME by Notes 8.5 (beta) - With annotations of a few of the issues

3) E-mail in GMail after being converted to MIME by Notes 6.5.3 (virtually identical to Notes 8.5 beta) 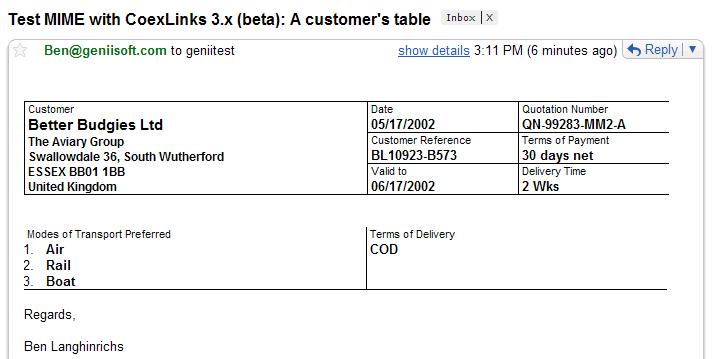 Conclusion: Notes 8.5 (beta) does little better at sending e-mail with full fidelity than it did in Notes R5.  iFidelity will allow your mail to go out looking the way you created it, not as translated by Japanese video artists might translate it.

Looks great, Ben. A tiny bit of extra space on the Coex version between the two tables, and the numbers below "Modes of Transport Preferred" are lining up a little differently, but overall a 10000% improvement.

Erik - Thanks! As for those issues you mention,they are why the product is still in development. The goal is as close to 100% fidelity as we can force it, as that is what our customers expect, "slam dunk easy and drop dead perfect".