One of the most confusing and aggravating parts of studying the Notes/Domino MIME rendering is that there are multiple engines, and many decisions made one way in one engine are made differently in the other engine.  I showed the example of collapsed sections (client -> no titles, server -> titles) and the example of tabbed tables (client -> tabs missing completely, server -> tabs shown in separate row), but also various examples where default fonts are interpreted differently, spacing between tables is different, cell widths are different, etc. etc.
In this post, I show another clear, simple case where the client renders the MIME making one decision, while the server renders the MIME making a different decision.  It seems like it would be an easy fix to put the wording in for the client version, but it is extremely hard to understand why two different decisions would both be reasonable.  This difference has been around for multiple years and versions, without communication between the client and server teams to determine a unified way to handle the issue.  The result is confused customers who receive such emails, and yet no action has been taken to make one match the other.  I'll leave it up to you to decide which is the "right" decision, but I'll leave it up to IBM to settle on one and make them both match.
In iFidelity for Lotus Notes, we have chosen to match the Domino 8.5 server choice shown below, but we do it whether you use iFidelity on your client or on your server.
Simple memo with file attachments in Notes client in rich text

Same memo after sending to GMail, rendered to MIME by Notes 8.5 client 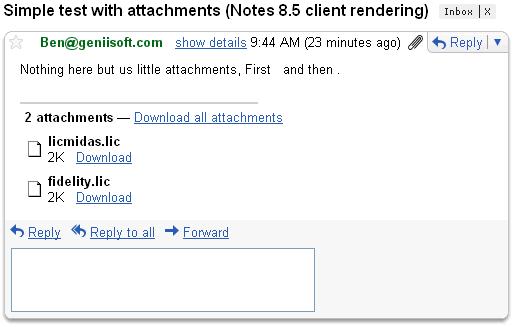 Same memo after sending to GMail, rendered to MIME by Domino 8.5 server 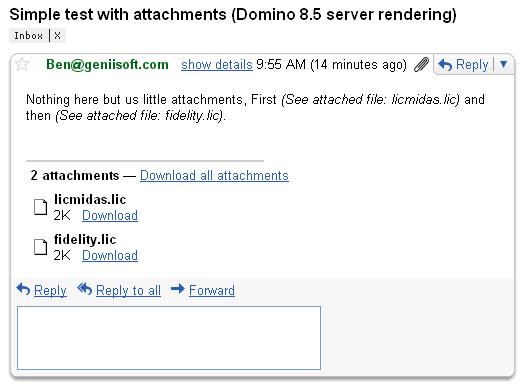