An iFidelity feature I never mentioned before

Now that iFidelity is officially released, and now that the first twenty-four Business Partners have requested their free licenses, I thought I'd mention a small iFidelity feature that may be unknown to people.  I haven't mentioned it because I don't want to give anybody the mistaken impression that iFidelity is made for sending HTML mail - it isn't.  iFidelity is made for sending well rendered email, the vast, vast majority of which is regular rich text mail that you just want to get to the recipient looking like you sent it.
But the truth is, every once in a while, there is an advantage to including some HTML, either for an entire message or for a simple URL based image or something that you want to appear "just so".  With that in mind, iFidelity does recognize passthrough HTML and include it.  To show a really simple example, in this case with the whole message in HTML:
Email as it was sent from Notes 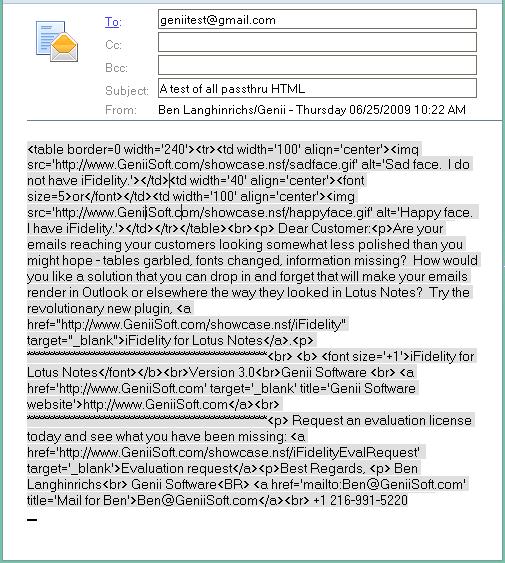 Email as it would be received elsewhere

Are your emails reaching your customers looking somewhat less polished than you might hope - tables garbled, fonts changed, information missing? How would you like a solution that you can drop in and forget that will make your emails render in Outlook or elsewhere the way they looked in Lotus Notes? Try the revolutionary new plugin, iFidelity for Lotus Notes.

Request an evaluation license today and see what you have been missing: Evaluation request