There are some annoying limits in Lotus Notes, although fewer than there used to be, but it is hard to beat Microsoft Word 2007 (and because it uses Word, Microsoft Outlook 2007), for incomprehensible and annoying limits, which seem to crop up without errors or warning.  For example, look at Gabriella's post about iFidelity on the iPhone.  Those nice colored bars work in Internet Explorer, Firefox, Safari, on the iPhone, in Lotus Notes, in Outlook 2003, in Gmail - heck, just about anywhere rational.  Where doesn't it work?  That's right, in Outlook 2007 or Word 2007.  Instead, you get this really stupid looking result (below)

But the question is, why?  Why does it work everywhere else, but not in Outlook/Word 2007?  What's worse is, you can go in and resize the graphics (in a reply or forward),  and it appears to allow the change, but then silently reverts to this size, with no indication of why.  You can drag the image border to make it bigger, but it snaps back when saved.  But why?  The answer seems incredible, but perhaps the properties box below will give you the hints you need: 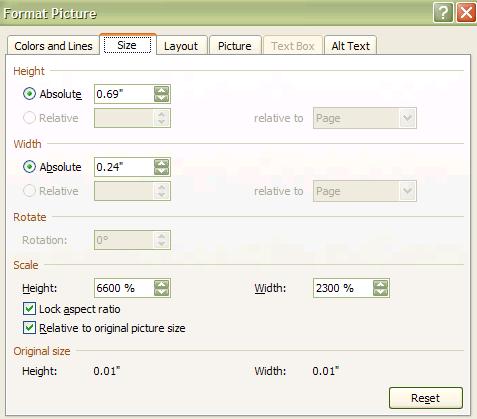 The answer is simple, once you look closely.  The size of the graphic (shown in inches, much as Notes would) is 0.01" by 0.01", although is is really a 1 pixel by 1 pixel graphic.  That is pretty typical on the web.  The height is shown 0.69", and even though you can adjust that to much larger, it snaps back to 0.69" when saved.  The big clue is the percentage, which is shown as 6600%.  You math geeks will probably immediately recognize that this is somehow related to a rounded 65536.  That's right, the graphic can't be resized larger than 6600 percent (6553, really, but it displays this way) of its original size, meaning there is a size limit based on a two byte unsigned word, divided for some reason by ten.
And you thought only Notes had these archaic and arbitrary limits.  Sure, 6600% sounds like a lot to expand a graphic, but given the frequency with which small gifs are used for tiled background and the like, this is a completely unacceptable limit for real HTML emails or documents.