Genii in a bottle: Improving Notes from the inside, Part 1

As I have hinted recently, I have been working on an exciting new feature that ties in with all the recent posts about the new Discussion template, XPages, the Dojo editor, 8.5.1 (beta), etc.  I refer to the feature as AutoRecognize, but it might be better described as Genii in a bottle.
Here's the idea.  Our CoexEdit product has been quite popular, but it still requires two steps which make a lot of developers and administrators hesitate.  The first step is the installation of a web editor, usually FCKeditor, on a server.  The second is the modification of the database to use CoexEdit, which is not difficult, but is a hurdle.  One option to help with this latter step was to make pre-modified templates, such as the Discussion template, but in talking with customers, it turned out that few people were using the Discussion template unaltered, partly because the web side was not very attractive, and partly because there were serious rendering issues with the web editor.
But as the Best Fit for OS editor evolved, and the Dojo editor was added, an opportunity arose.  What if we "auto-recognized" the Discussion template, and made it work better with no design changes and no separate web editor.  Better yet, what if we auto-recognized even variations of the Discussion template, so that when the template described by Peter Presnell in Preview: Discussion Template for 8.5.2 is released, we would work with that, or if the template described by Niklas Heidloff in Can a Composite Application look as good?  was released, we would work with that.  All without involving a developer.
The first proof of concept is ready, and I will probably release it to public beta soon.  For the first demo video, I decided to use the Notes 8.0.1 Discussion template, but this works in earlier versions, as well as in 8.5.0 and 8.5.1 (with some internal differences that are invisible to the user, so the same server could have three different templates and they would all work).  Of course, Discussion databases aren't the only ones to use the Best Fit or Dojo editors, and with the new XPages templates popping up, there will be more.
All it takes is two files and two lines.  The files are nCoexEd.dll (or OS equivalent on Linux or AIX) and coexedit.lic (the license).  The lines go in the NOTES.INI on the server, with no need to add any client component.  Here are the two lines from my server's NOTES.INI
extmgr_addins=CoexEd
CoexEditRecognizeDiscussion=1
What happens when this is used is somewhat magical.  Even existing discussion databases just get... better.  I created a very rough, completely unedited, demo of this before and after turning on the CoexEditRecognizeDiscussion (which you can turn on and off from the console).  It is seven and a half minutes long, but I think you'll find it interesting.  Just click on the image below to see the demo.
Click on image to see demo 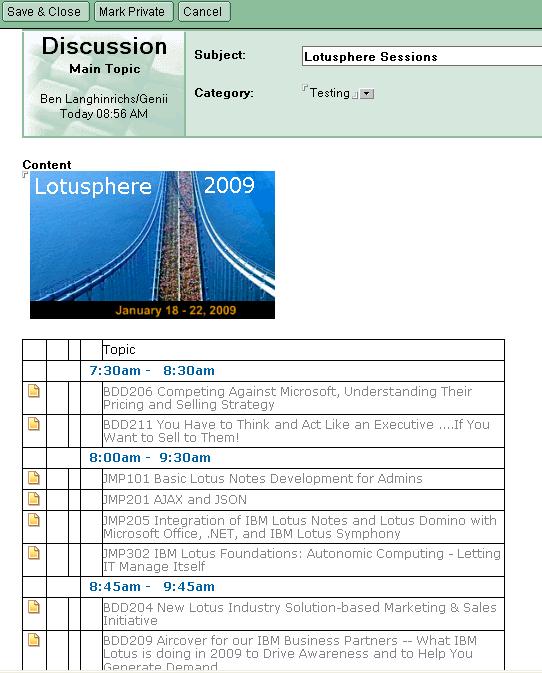 I have no idea how you are able to do that without any additional design components in the database at all. Amazing. Assumingly you could allow me to set any db filename or replica id in the notes.ini to have it auto processed so long as the RT field names were what you expected such as "Body".?

As a matter of fact, you can, and you don't even need to use the same RT field names. You just specify the name of a template on the server, and it will auto-recognize the rich text fields that are set to Best Fit for OS, whatever their names might be and whatever forms they might be on. That way, you can use it with your own Xpage template discussion or pretty much anything that uses the Dojo editor. Or rather, I should say that that is how it will work. I am still working on some of the features, and trying to figure out how to watch for things like WebQuerySave agents that might need to be accounted for.

Fantastic . How far back do you think you can support it for?

@Gabriella - That remains to be seen. My guess is I'll go back to ND6, as I think that is when Best Fit for OS became an option. I'll probably focus most on ND7 and higher. If there are technical difficulties with earlier versions, that might change, so no promises yet.

Ben - This is Great !! Of course wouldn't you know that after talking to you about CoExEdit for at least 3 years I finally got around to implementing it this week and now you make it 100% easier !! Just my luck