Given that our products often enhance features or patch holes in IBM's products, I may sometimes seem hard on IBM, and particularly on their rich text rendering capabilities. Over the next week, I will show a few posts which demonstrate how our CoexLinks Fidelity product corrects further issues with email, but before I do, I want to give a huge shout out to the Notes developers who worked on Notes 9. Customers have complained about rich text to MIME rendering for years, and IBM listened. Specifically, here is an example I have used often in the past, and how it looks when sent via Notes 8.5.3  and Notes 9. Note: Among my customers, Notes 8.5.3 is still the most common version out there, but Notes 9 use is growing.
The difference between the Notes 8.5.3 and Notes 9 mail is night and day if you have your location document set to send as MIME so the client renders the mail. Since tables have long been one of the most visible failings in the Notes rich text -> MIME conversion, the fact that Notes 9 now renders hidden/visible cell borders, cell border thickness and cell border color is a huge improvement. For sake of comparison, I also included the rendering sent from Notes 8.5.3 using the new CoexLinks Fidelity, and while there are few marginal improvements in exact font sizes and the text highlighting, for example, I wouldn't have written the product for this alone. And while it may be nice that Notes 8.5.3 users can also have this fidelity, an upgrade to Notes 9 would do it as easily and with other benefits.

Fortunately, there are other excellent reasons for companies to use CoexLinks Fidelity, but in the interest of general acceptance of IBM Notes 9 Social Edition, I applaud IBM and its developers. I'd far, far rather provide enhanced features/functionality than repair holes and defects, and this is a big step forward.
Correction: While this wonderfyl rendering is in the Notes 9 client, the rendering I thought was 8.5.3 was actually Domino 9.0.1 (rendered by the server rather than the client). The Notes 8.5.3 rendering is still not good, but it is not as bad as the Domino 9.0.1 rendering. Sigh! Still more work to do for IBM. At least we know the code already written. 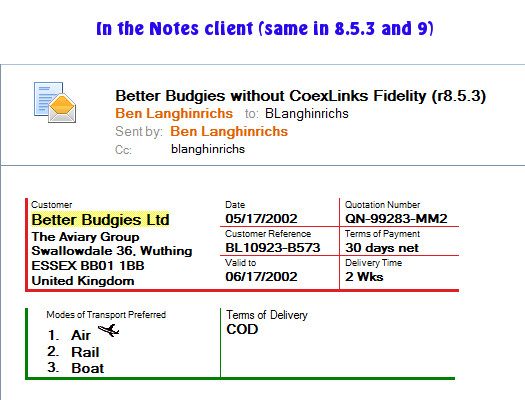 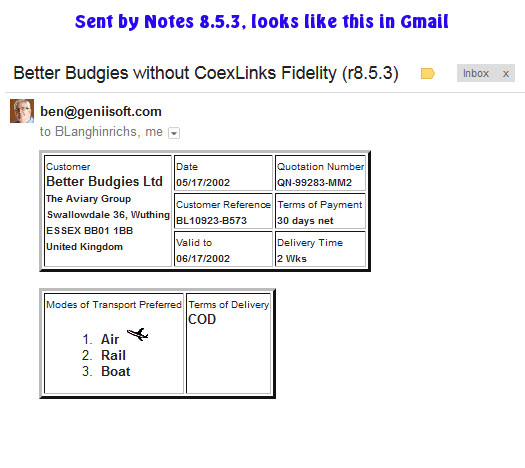 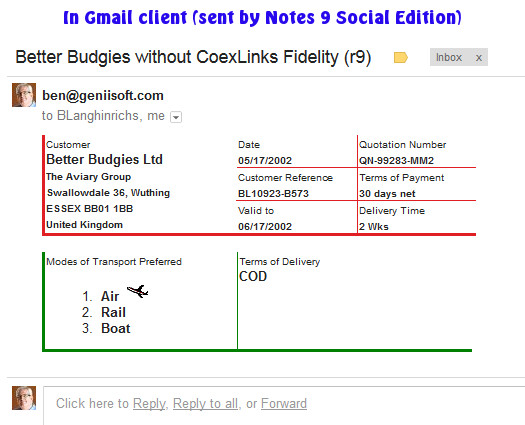 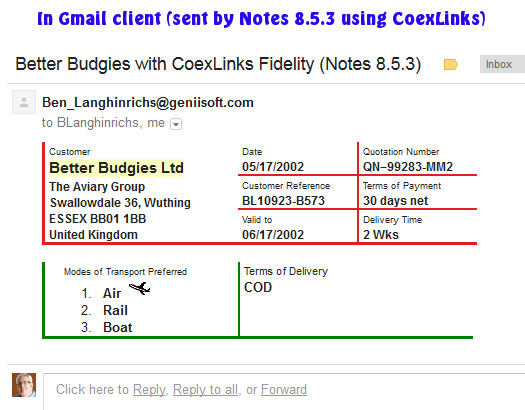 Correction: This is actually the Domino 9.0.1 rendering: 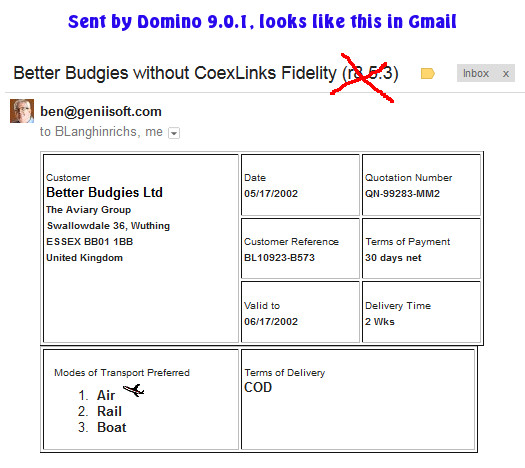 Hey Ben, thanks for posting this. That is QUITE the difference w/ Notes 9 rendering, and truly a welcome change. I'd no idea that this was included in the upgrade!

While I don't follow all the sales talk closely, I was surprised that this hasn't been talked about it more. I guess it is a hard thing for IBM to show how something sucked in the last version, but now doesn't, but this is the kind of thing that might be a real impetus for upgrades for existing 8.5.3 customers. Also, good for the "see, you get something for staying loyal" speech.

Do you know if it's the client or the server doing the better conversion?

As this is outbound email, is it Notes 9 or Domino 9, or both, that include the improved HTML generation?

Carl and Rich - An excellent question. This is the Notes client. I think the Domino 9 rendering is still borked, but will test and confirm.

Damn it! That is only the Notes 9 client, but it turns out it is even worse. When I thought I was using Notes 8.5.3, I was actually still sending using the rich text to the server which is 9.0.1. So I switched to Notes 8.5.3 and it is borked... but differently than the server. God, I hate this stuff. I have corrected the main post

Ben, So now this post seems very confusing. Is anything improved in 9 or 9.0.1 Notes or Domino? Could you clarify please? Thanks

Don - Sorry, I need to rewrite a bit of the post as I only discovered the issue after it was posted. There is a huge improvement if you use Notes 9 and set your location document to send as MIME, so the client does the rendering. If you have it set to Notes Rich Text, or if an application on the server sends mail, it has not improved.

It's still kinda crap rendering, which is good for you.