The king is dead - long live the king

Paul Withers made an interesting comment to me today on Twitter (see below). Below that, see a portion of a slide from one of these sessions, ID106. Finally, see my video, First Test of Midas in Notes browser plugin recorded, released the first day the browser plugin was available publicly. The interesting thing that these three together point out is that IBM acted as if it could simply kill the king and eliminate the monarchy, but instead just had to replace it with another king.
Among the great strengths (and terrible curses) of Lotus Notes (aka IBM Lotus Notes/Domino, aka IBM Notes/Domino) has always been its versatile rich text. Not simply in documents, but forms, views and everywhere else, rich text is the underpinning of Notes and Domino. In Tolkienian terms, it is the king under the mountain. (Note: only I would ever describe rich text as "royal" without adding "pain in the ass" after that. I know, I know, it is hardly king of the heap for anyone but me, but it still supports tens of thousands of applications at many large companies, and supporting it pays my kid to get through college. Enough said.)
So, while IBM is happily proclaiming the end of Notes, all they have really done is put out Notes 7 (without Eclipse) and bundled it into a browser window. Same functionality. Runs LotusScript the same way. Support Notes and Notes mail the same way. Even supports addins such as the Midas LSX... because it is the same thing under the covers. The king is dead - long live the king.
Someday, Notes will go away entirely. It may be another decade, but when IBM has sessions about the "browser plugin", they are still supporting the monarchy that they despise so righteously. And on the bright side, we get away from Eclipse when we run Notes the browser plugin, which has been a dreadfully heavy load to bear. 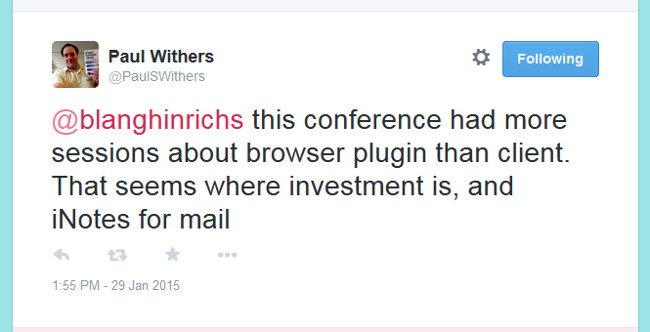 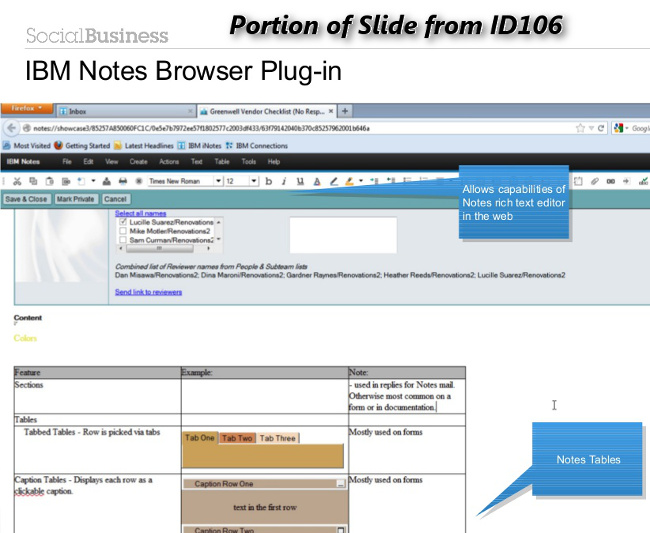 Good points. It reminds me a lot of Internet Explorer. It had a proprietary way of doing things in a way no one else did. But it's been popular. Now they've realised the world is bigger than one platform - the desktop - so have moved more in line with standards. The Notes Client was king, but a lot of work is now done in browsers or mobile, for business and especially mail. But we're stuck with legacy. Equally I think it will be a very long time before developers can only support older web apps on Internet Explorer 11+. Unless businesses get a real kick from employees who demand modern.

I do think a lot of companies will "get the message" and move legacy apps to the web, but it remains to be seen whether they move to IBM's web or someone else's.