The low code you already know

Over the next few posts, I hope to show some different features of Notes/Domino which actual customers use, both to suggest things you may not have thought of, and to highlight (after the fold) where our software is important even with these native applications.
This first comes from an application a customer developed with the lowest of low code. They created a form and a view to show a visual representation of various gauges and settings. They used a combination of numeric fields driven by @DbLookup and computed color fields.
Color fields? Yeah, I don't use them often myself, but if you create them as editable, they allow you to select a color and then show the color. They store the value as an eight character text value with the first two character always 00 and the next six a hex color string as used on the web. So, red would be "00FF0000". Well, these clever people decided to use calculations about how far these gauges were from whatever normal was, and showed the value as a color by shifting up and down the red and green values. Simple formula langauge. No LotusScript even. On a good day, the results might look like this. (I can't show what their actual gauges are measuring, so I pretended it was high water measured at various places. 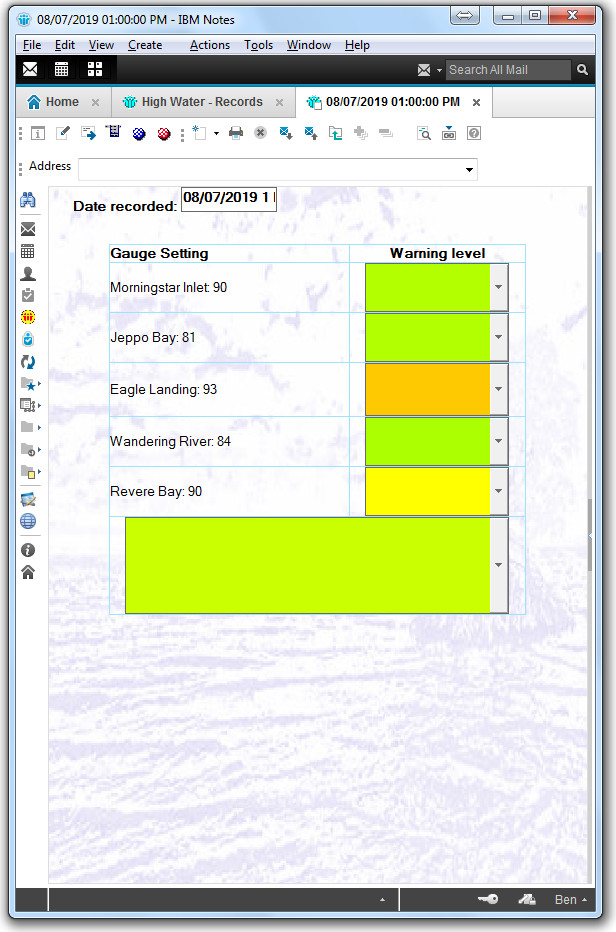 The bottom color is somehow calculated from the average differential. The field definition looks like this. They just played with the size of the field to make it stand out. 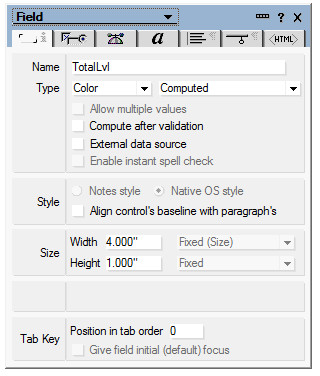 So, yes, a series of color fields. You could do something similar with a table and computed table cell images, but there are two reasons they didn't. The first is that they would have need a whole slew of images since there are technically 510 possible values (255 for red and 255 for green, though it turns out there are only really 256 rational possibilities). The second is that when the gauges look bad, they email them. Imagine that one day, they saw this. 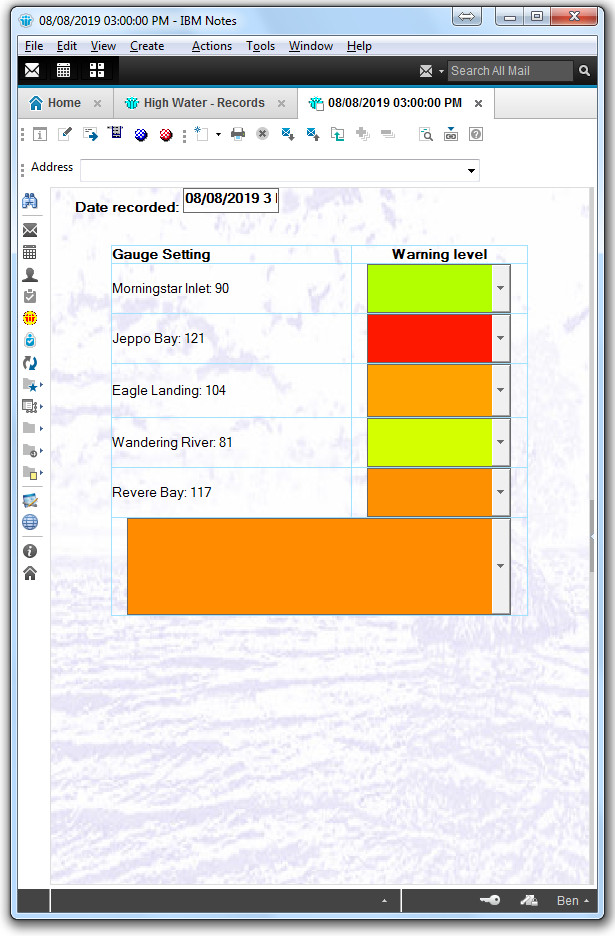 Well, that doesn't look very good, so they just do Action - Forward and send the results and a note to the relevant people. Mind you, there might be other ways, but this is a very low code system that works in Notes right now, and would work even on the iPad or whatever if that is where you wanted to run it. The low code you already know.
So, anyway, they email it like this: 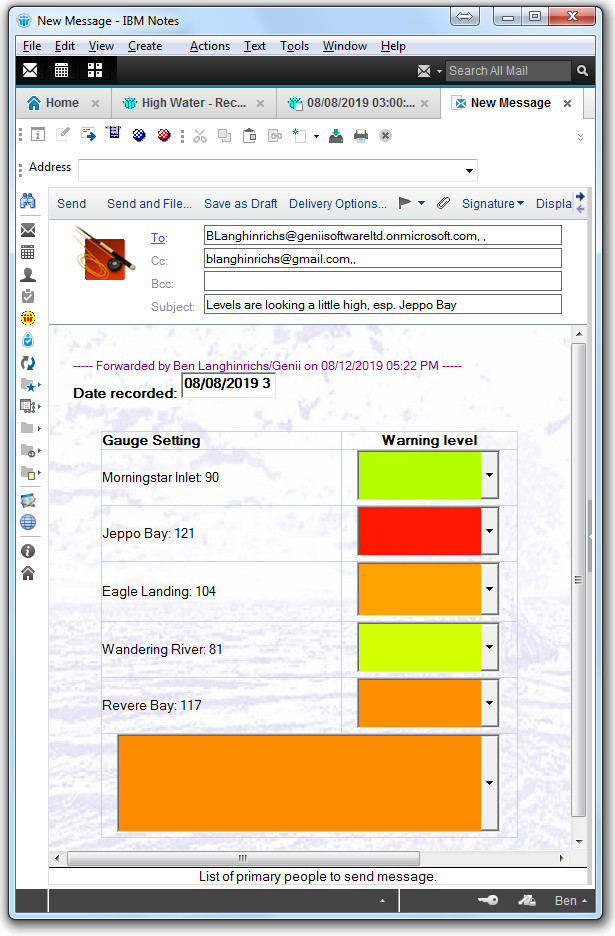 For a while, this worked perfectly. But then one of the people they sent it to went on vacation and forwarded her email.
*** NOTE: This is where the Genii Software stuff comes in, so if you just want the ideas above, you can stop reading now.
Let's assume that her mail was forwarded to a Gmail account. The results were less than ideal. 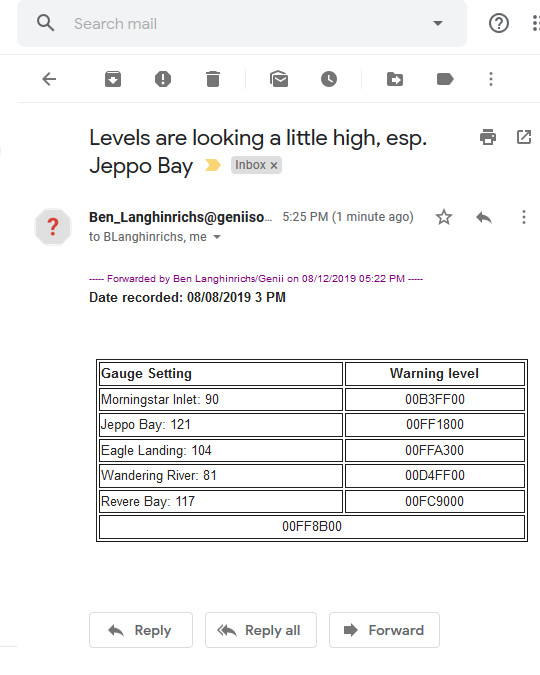 That doesn't exactly communicate the same way, does it? It perhaps makes the point that this isn't an accessible solution, but that's a different topic. Anyway, perhaps the mail could have been forwarded to Outlook365 instead. Then she would have seen: 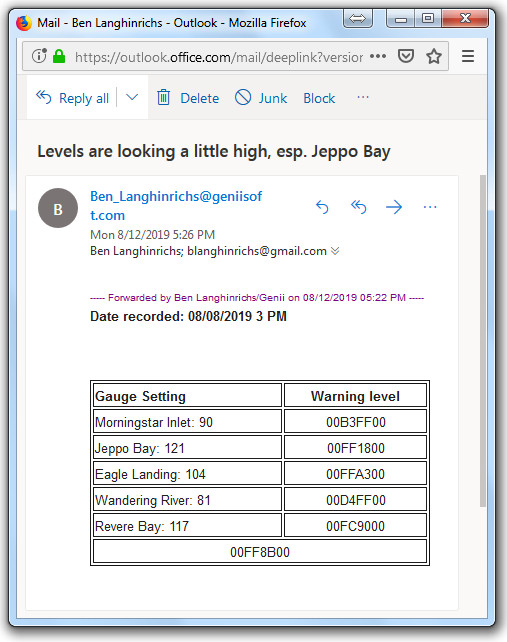 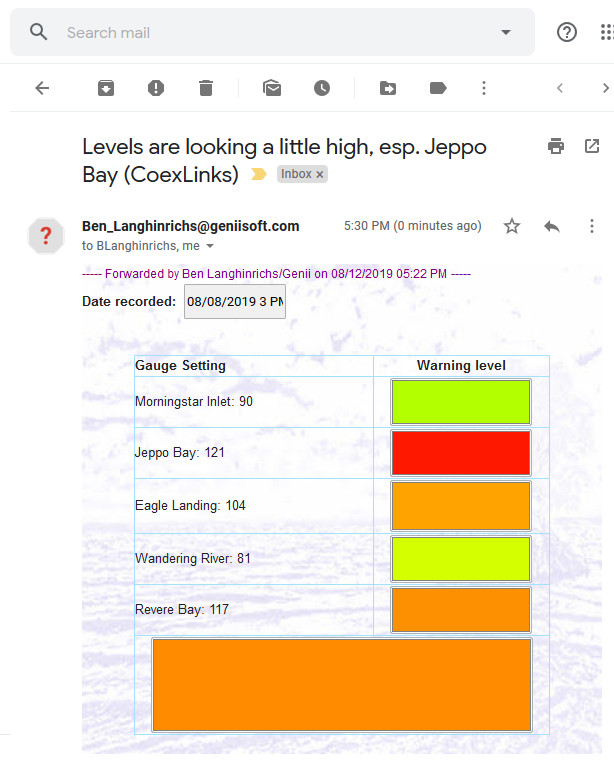 That gets the point across! It even includes the background waves, though they aren't particularly important. So, next to Outlook 365: 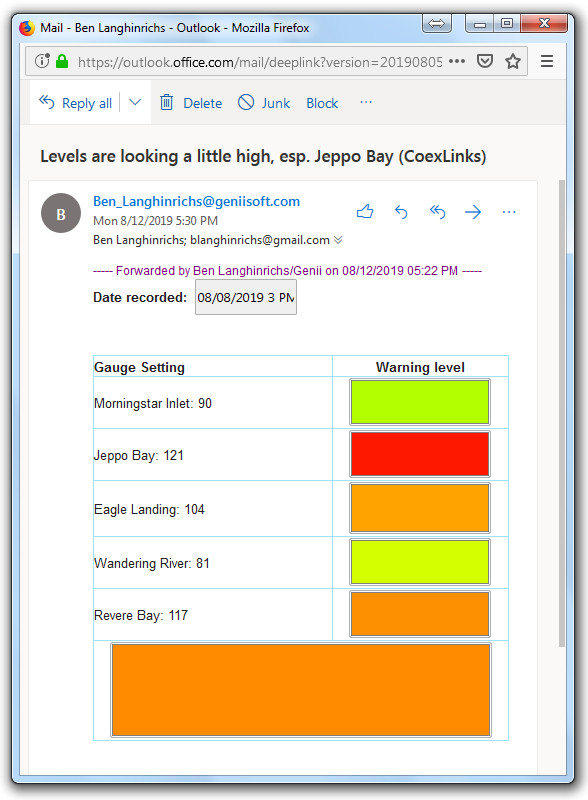 As often happens, Outlook doesn't support even as much as Gmail does, and both support less than Notes/Domino does. But still, the only loss is the background image.
The take away is that we have a powerful low code system already in place. But that means you don't know what applications are out there creating content and using email. You don't have to know. And if you (as a system administrator) don't want to hear complaints, you'll get CoexLinks Fidelity to handle whatever weird low code creations there are so you can stay busy with more important stuff.
Try CoexLinks Fidelity for yourself.