Getting the point(s) across with Domino, O365, and Outlook365

When running some tests for a couple of prospective CoexLinks Fidelity customers, I was reminded again of two things.
One: Domino email doesn't always render well without help (i.e., CoexLinks Fidelity)
Two: Outlook 365 is a weird beast, not matter how much people might want it to be a successor to Notes/Domino.
Let's take the following email, written in Notes.
Sent from Notes 11.0.1 client
While nested bullet points like this may not be elegant, they are reasonably common in office emails, and were back in 1989 when Lotus Notes 1.0 was released. Notes 1.0 supported nested bullet lists. 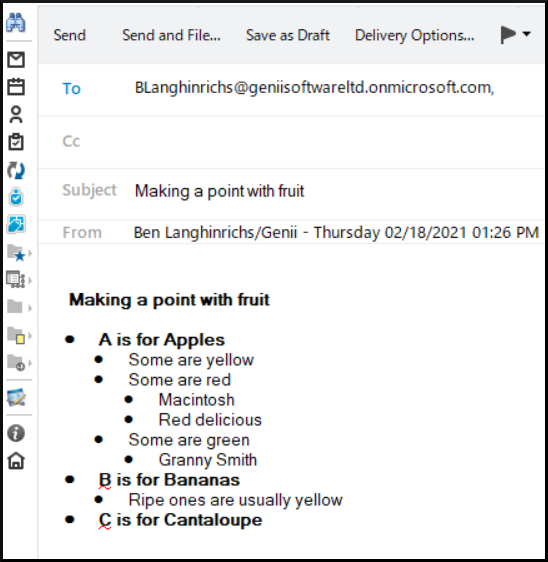 Received in Outlook 365 web client (after rendering by Domino)
One of the fundamental ideas of nested bullet points is in that first word, "nested", but sadly, the point has been lost due to the Domino rendering. But worse is yet to come. 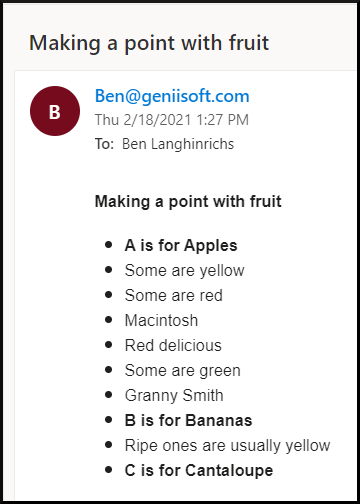 Received in Outlook 365 desktop client (same email)
Having already lost the first fundamental idea of nested bullet points, Outlook manages to screw up the second, as in that second word, "bullet". The bullets are mysteriously missing from the email. Absent nesting, indentation, and bullets, the combination of Domino 11 and Outlook 365 has taken this commonplace corporate staple and completely missed the point(s). 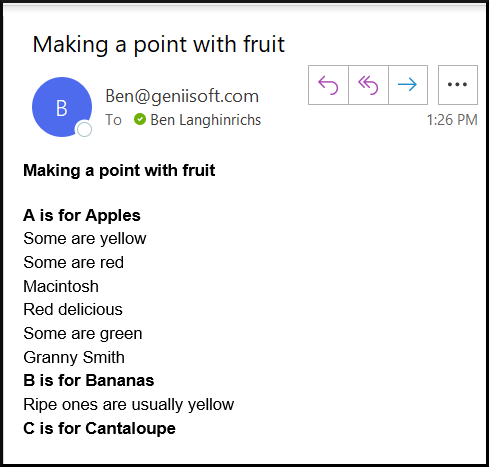 Received in Outlook 365 web client (after rendering by Domino with CoexLinks Fidelity)
Fortunately, all is not lost even if you use the unholy combo of Domino and Outlook 365. You just need to add CoexLinks Fidelity to the mix, and badda-bing badda-bang, things get rendered right and displayed right in Office 365 on the web. 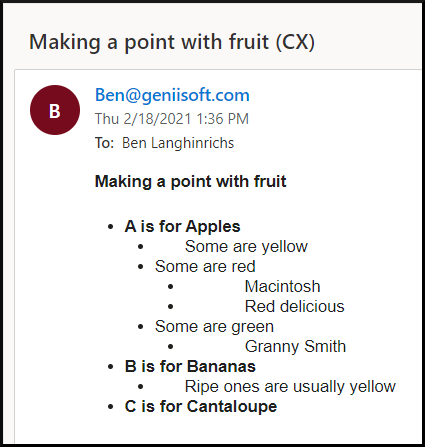 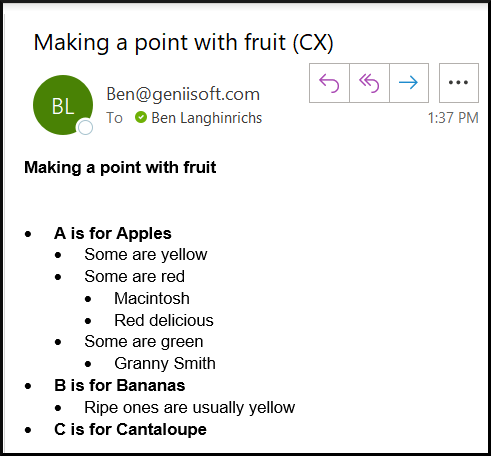 If your company uses Notes mail/Verse, even if it just uses them to pass on programmatic emails to Outlook 365 (or Gmail or whatever), CoexLinks Fidelity fixes the problems that both Domino and Exchange have with email. It's that simple. Use the form below to send yourself a few sample emails and see what I mean. (Email address will not be sold or shared or used for anything but a single follow up to offer an evaluation license.)