It feels like forever since I last posted a Show and Tell Thursday post, so of course when I finally get around to it, I don't get to it until Friday.  Nonetheless, this is a handy feature that I have wanted to mention for a while and not gotten to.  It may well be one that some people know about, and others say "Wow, I never noticed that."

The property boxes in Lotus Notes are often very densely packed, and occasionally, a valuable feature is disguised in plain sight in an attempt to conserve space.  This is certainly true on the border tab used for images, tables (table border, not cell border) and paragraphs.  I'll start with images, because they are very easy to see and use.
Here is the border tab on the image property: 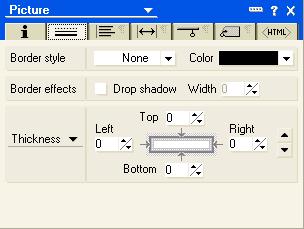 Look on the left, and you will see that the border Thickness is actually a drop down, even though many don't notice it: 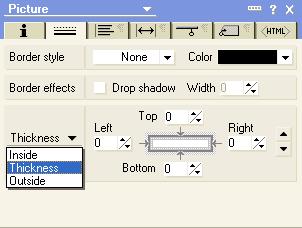 The three different settings are Inside, Thickness, and Outside.  The Inside is the spacing inside the border, the Thickness is the thickness of the border itself, while the Outside is the empty space outside the border before the surrounding text or whatever.  Watch what happens as I change these, starting with setting a solid blue border 3 pixels wide on all sides, with the text aligned to the right, as that makes the change easily visible.
Step 1: The image with text, but no border set

Step 2: Setting the border to a solid, 3 pixel blue border.

Step 3: Setting the inside border thickness to a solid, 8 pixel space.  See how this gives white space inside the border.

Step 4a: Setting the Outside border thickness to a variable spacing.  I have to show this in two images, as the first keeps the selection border, which allows ckick and drag

Step 4b: Clicking off the image removes the selection border, which then shows you how there is white space added around the border.  This is especially useful for adding space between the image and text. 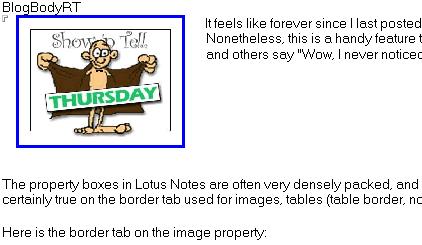 One issue to watch out for in versions prior to 8.5
It is perfectly possible to set inner and outer widths with the actual border set to 'None', but in 8.0.1, all the border information is lost if there isn't some border.  This has been fixed in 8.5, but in earlier versions (I think the border widths were added in 6.5), you may have to make a 1 pixel white border or something to get the effect you want.  Test it, as I am not sure which versions have that bug.