Myth: Best integration with Office 365 must be Office 365

If there is one thing Microsoft has capitalized on for years, it is their integration with their own products. So, you might assume that a typical "manual" integration between the latest version of Microsoft Word and the latest O365 Outlook would do so much worse than that same integration with Notes. Not even with Notes 11, but with any version of Notes back a ways (at least 8.5.3). For this test, I downloaded the latest version of MS Word from O365, but it works with any version of Word going back decades.
Scenario:
Edward from Marketing puts together a little promo text in MS Word. Nothing too fancy, just some lists of features. When he is satisfied, he copies it into an email and sends it out. Does this make sense as a process? Maybe not, but I bet somebody in your office (unless you work by yourself) has done something like it today. Create in Word, copy-paste into email. Bog standard procedure.
So, going from Microsoft's flagship word processor to Microsoft's flagship email, you might think the integration would be solid. Well, not so much.
Promo text created in Word 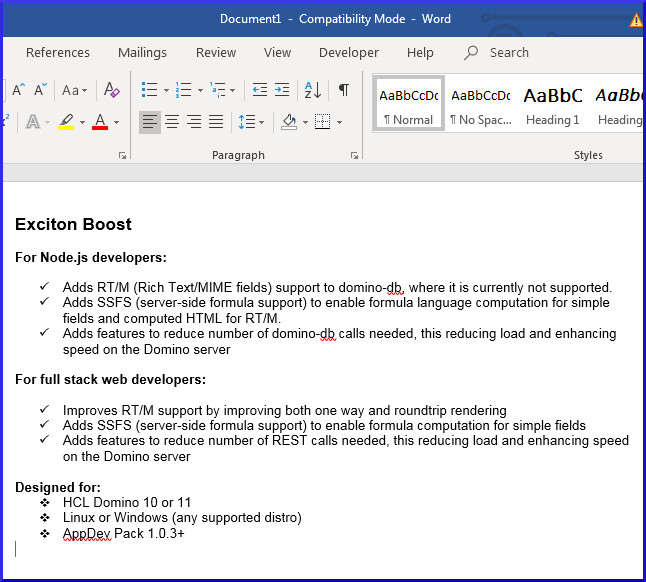 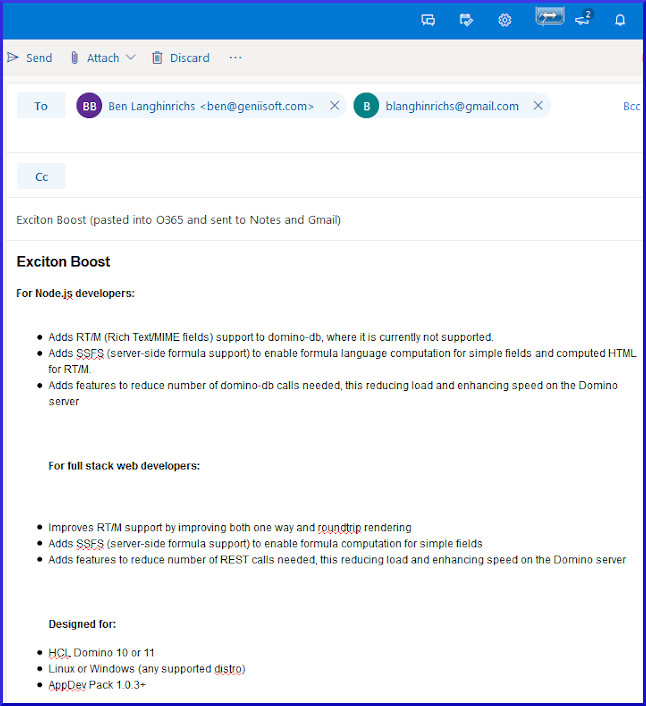 Now, the basic content is there, I'll admit, but with the formatting and all are pretty messed up for a basic copy and paste between two flagship products from the same company. You'll notice that:
Again, the original text was nothing fancy or unusual. The bullets are two of the most commonly used in Word (amazing what the Internet knows). The result just looks crappy, and Edward is not happy.
But maybe that's just the way it is. So, let's copy that same promo text into Notes:
Promo text copied and pasted into HCL Notes 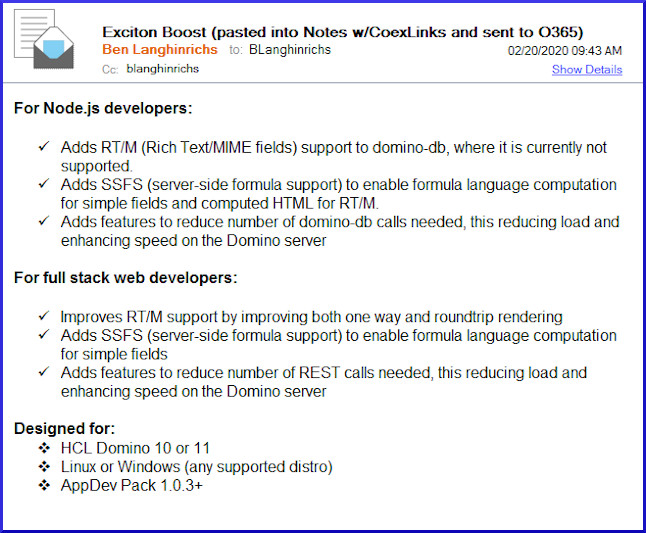 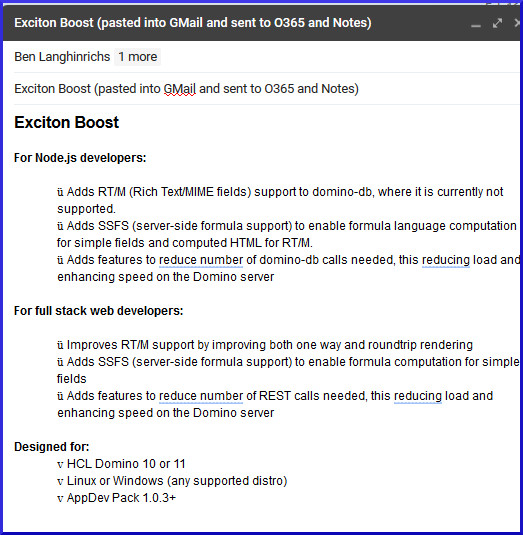 Honestly, it is a heck of a lot better than Outlook, though the bullets have become weird random characters.
But with email, the proof is in the pudding. Or rather, in the recipient's mailbox. So, what does these emails look like when they are received.
Email from Outlook 365 and sent to HCL Notes 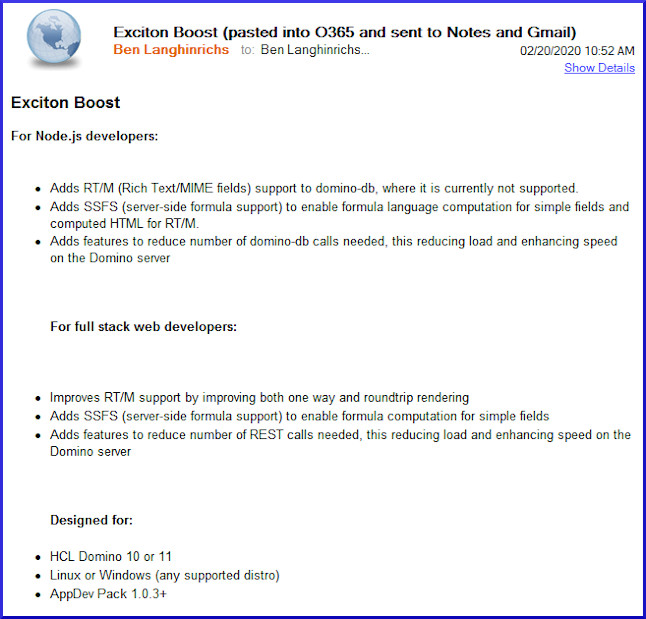 Really, dudes, that's just embarrassing. Granted, it is no worse than after it was pasted into Outlook, but it is no better either. Ed from Marketing is not going to be happy.
Email from HCL Notes and sent to Outook 365 (using CoexLinks Fidelity, of course) 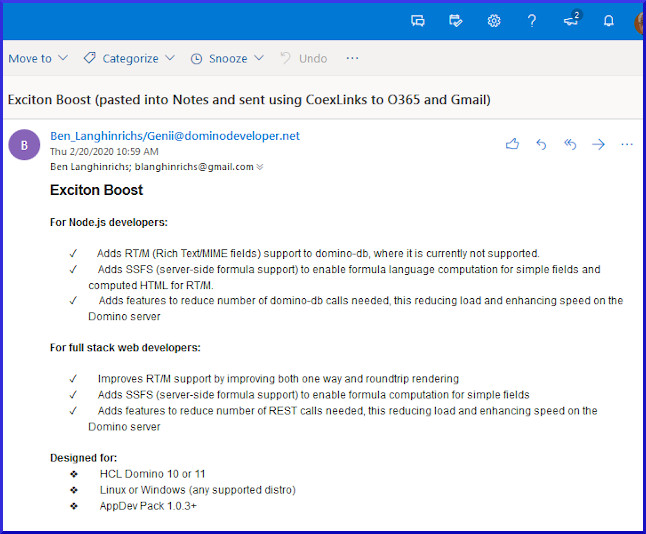 Looks pretty damn good, wouldn't say? Perhaps people should make Notes their favorite email, after all. Because the big argument was office integration, right?
By the way, you'll notice that I used CoexLinks Fidelity to send the email. If your company is not using CoexLinks Fidelity by now, I have to ask when you plan to catch up with your competitors, many of whom have been using it for close to a decade. Maybe there wouldn't be such a push to O365 if you caught up. Let me know if you would like to give it a try. Contact me by e-mail at .
But even if you don't use CoexLinks Fidelity, most email is sent within a company, and the fidelity is preserved perfectly when you paste into Notes and send to somebody else within your organization. The same cannot be said for O365, because it is already broken by the time it is pasted in. Sent from one person to another, it is crap. Sent from desktop Outlook to O365, it is crap. Sent from O365 to desktop Outlook, it is crap.
Not that I feel strong about the subject or anything.

Its even worse at times between Word, OneNote and Outlook!