REST plus RPC: Do the demo backward

I usually wait until I have successfully completed a demo before I post about the results, but that doesn't match well with we actually face in development. Decades ago, we mocked up the final results using Dan Bricklin's Demo or sketched a "UI Design" on a whiteboard. Now, we have more modern techniques, but it's all basically the same idea. Design the goal before trying to achieve. It's a bit risky for a demo, but I thought I'd step through the entire process with you, including any fits and starts. Hence, this series of posts may not be very polished, but I hope they inform how you could proceed. All of these will use Exciton Boost 4.6, and if you are far more motivated than I expect of anyone, you can request an Exciton Boost evaluation license now and I'll post the db and code snippets so you can follow along. Or even tell me how I could should be doing it. Developers seem to love to do that.
I should note that I am not overly fond of Agile development or most other methodologies, and tend to go with whatever others are using. For this process, I'm just going seat-of-my-pants. If a formal methodology is important to you, remember what the philosopher on the deserted island said when faced with a cache of canned goods: "First, assume a can opener."
Goal: nested tabbed table that displays and works well in both Notes client and web/mobile browser
I decided to start with something familiar to Notes developers, but recognizable in modern web design as well.. Tabbed reports/interfaces were popular in Notes before they were popular on the web, but are now lots of places. (I don't care if you don't like them. Mutter that quietly to yourself, and then come up with something else you'd rather see and suggest it to me. Perhaps it can be my next demo.) 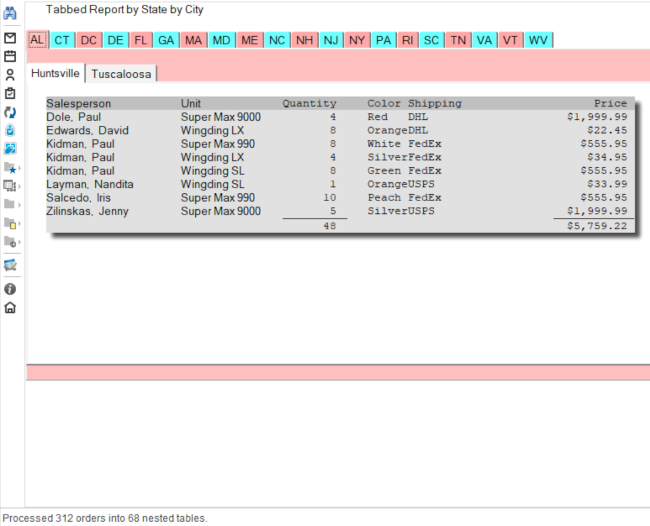 I won't show the web version, as I haven't developed it yet, but imagine it looks and acts basically the same. Our Bricklin's Demo mockup, our rules.
Source data
For the iteration of this demo, I'll use a Notes data source/view, as those are familiar to most of you. It also gives me a chance to use the REST API portion of Exciton Boost. There are 312 orders in the database, and a total of 68 nested tables what with all the cities and states. 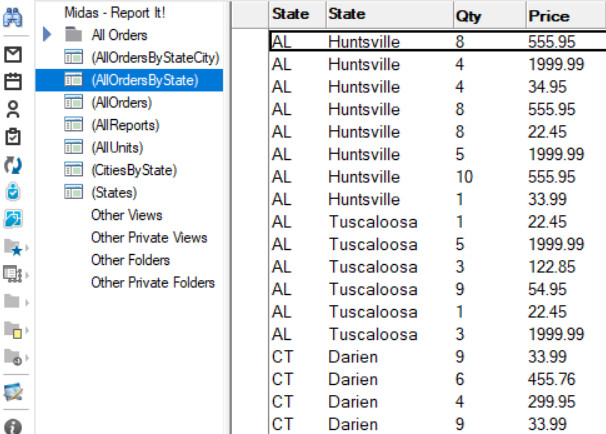 Bonus round
For the second iteration, I'm going to use a public REST API which I don't control. Imagine the nested tabbed table as looking kind of like the first. This is a bigger data set, I think, though I admit I haven't even checked carefully. It comes from Open Brewery DB and gives access to a bunch of brew pubs and such in the United States. We'll probably try different parameters as we work, but a sample from Ohio is included below. I don't quite know what I'll do with it, but we can play and you can make suggestions. 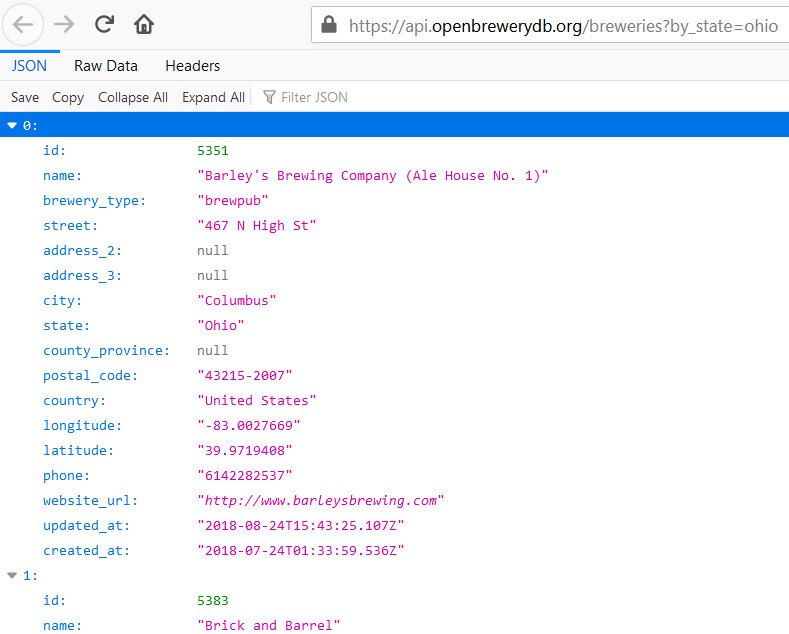 => Request a free Exciton Boost eval in January, and if you later purchase a license. we'll add in four hours of development assistance, a $700 value. <=
Continuing reading as I develop the solution. My follow up post, REST plus RPC: the right data in the right format, and no more, is now available.